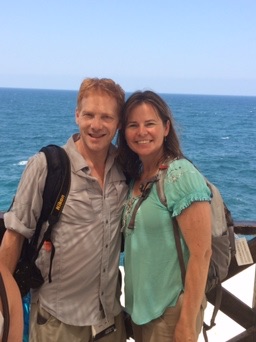 We should’ve met as freshman when we were both on the crew (I rowed on the women’s team & he was a cockswain (small bossy guy with megaphone) on the men’s team. But we didn’t meet – even though he was a frequent running buddy of my roommate Suzanne.

We finally met Senior year when he & his buddy Pete were mistakenly assigned to the cabin my 5 girlfriends and I were assigned to on the All- Cal ski trip in Steamboat Springs, Colorado. My friend said, “no boys allowed!” –but I thought they were cute and convinced the others to let them stay. Randy I were inseparable that week — skiing by day and dancing at night. Otis Day & the Nights were in town and we went to their show– we couldn’t get the song “Shout” out of heads all week!
It took him EIGHT years to ask me to marry him! I’m so glad he finally did! life’s been full of crazy adventures and we just celebrated our 2oth anniversary!!