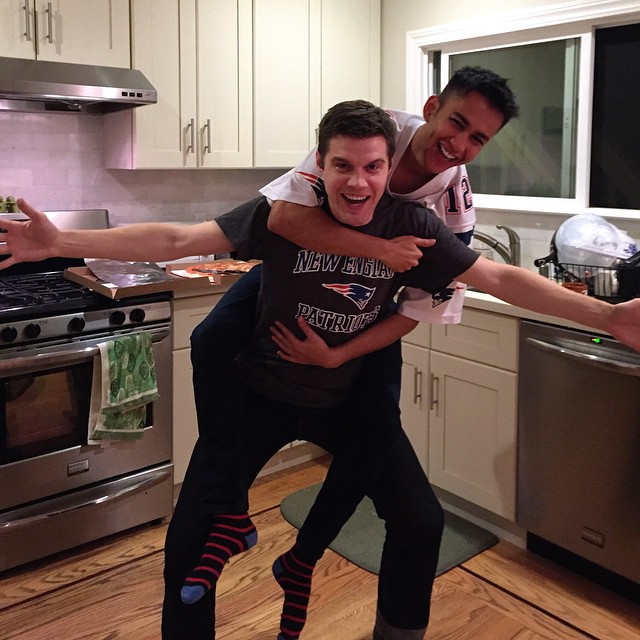 It was high noon in Austin, Texas. The sun shone strongly through the glass windows of the Google office’s kitchen, where a heteroflexible and sexually distressed Brian was visiting for a business trip. Of all the healthy food offerings available, Brian was craving perhaps the peak of Western culinary expertise- Lucky Charms. As he gracefully began shoveling marshmallows in his house, an olive skinned and sharply dressed Steve strolled in, discussing his recent law school applications with a mutual friend. Brian’s attention was immediately diverted from his milk and sugar concoction to something much sweeter – a gorgeous, intellectual, and ethnically ambiguous boy with a delicious accent. But how to engage him!? Was he even gay?! Brian had fooled around with guys before, but never had a boyfriend. He had dabbled in Legal Studies 101 and watched at LEAST 25 episodes of Law and Order, so an intellectual intro should be simple. Brian led with the ever so smooth pickup line…”Can’t believe you guys have Lucky Charms in your MK” GENIUS. It worked. Casual conversation, nearly unmemorable for its sheer excitement…or something. Brian learned Steve was on the Sales teams in Texas, and lo and behold, we were scheduled to have a dinner with them that night. Needing to re-exert his masculinity, Brian left him with a solid bro-fst bump: “You coming to dinner tonight”?

Debrief with the team. Who knew who that boy was? What was his story? Brian had noticed Steve was wearing a ring (which he’d later discover was simply a fashionable thing to do). Rahul said that means he must be married. Pete heard he had kids. No, no this couldn’t be right. Everything had been so perfect over the bowl of Lucky Charms!

Fast forward to dinner. Brian strategically positions himself across from Steve at the table. It turns out he is sitting next to Kate, Steve’s roommate and a voluptuous blond. Brian has the brilliant idea to make Steve jealous, he will spend the evening hitting on his roommate. Steve doesn’t seem to get it. Many shots are had. Brian learns what a “diet back” is – apparently to wash down a shot after taking it, you drink some diet soda. WHO KNEW?

Later in the night, the group went to a gay club for one of boy’s birthdays. Steve casually asks Brian if he wants any gum. His response: “That will be good for when I make out with you later”. “If you play your cards right” Steve replied. Brian was floored. Mutual interest is displayed!

Many more diet backs later, Steve can’t hold down the alcohol anymore. It comes up, oozing through his hands as he sprints to the bathroom. Steve doesn’t think anyone saw, but Brian did. He knew this was the man for him. A little bit of dancing, and the night is over. There will be one unoccupied hotel room in Austin Texas tonight. The rest is history. Steve ended up moving to San Francisco for law school, and after breaking up ONLY two times, the story of a bowl of Lucky Charms, some diet backs, a little bit of vomit, and a stick of gum has a happy ending.